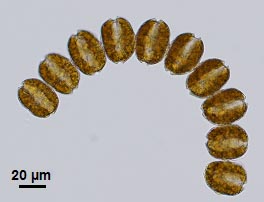 The chain-forming dinoflagellate, Alexandrium monilatum, has been reported to produce a bioactive substance with hemolytic properties (causes destruction of red blood cells and release of hemoglobin). A. monilatum most commonly blooms in warm coastal waters along the U.S. Gulf Coast, although it has also been reported from the tropical Pacific Ocean off Ecuador and as far north as Chesapeake Bay along the U.S. mid-Altantic Coast. A. monilatum blooms have been associated with massive fish mortalities off the Gulf Coast and Venezuela (Figure 1). A. monilatum typically occurs as motile cells in long chains, and less commonly as single cells. Long chains tend to predominate when cultures are in log phase growth, and as cultures age shorter chains (<4 cells) or single cell morphologies become more common. Like other dinoflagellate species, A. monilatum forms resting cysts under nutrient-deficient conditions.

The CAAE has two strains of this organism, courtesy of NOAA-NOS Charleston (toxic strain from colleague Dr. Steve Morton; toxicity confirmed by Dr. Peter Moeller) and Dr. Paul Hargraves (URI; nontoxic strain). Toxic strains of this large dinoflagellate (mean diameter ~50 μm) produce endotoxins with hemolytic and neurotoxic properties, and have been linked to fish and invertebrate kills in the Gulf of Mexico and, recently, Chesapeake Bay. 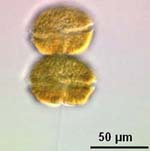 The nutritional ecology of A. monilatum continues to be the focus of ongoing research and was the subject of a M.S. thesis completed at the CAAE. May et al. (2010, Harmful Algae 9: 281-293) experimentally assessed the the effects of toxic A. monilatum on three commercially important shellfish species. Blooms can potentially affect shellfish survival and recruitment of some shellfish species by:

In collaboration with Dr. Pat Glibert (UMD) and Visiting Fulbright Scholar Dr. Allassane Ouattara (Université d’Abobo-Adjamé, Côte d’Ivoire ), the CAAE completed a two-year study to assess how nutrient pollution affects the main Florida red tide species, K. brevis. This issue has been of great interest to the people of Florida, many of whom have called for researchers outside the state to objectively examine the response of K. brevis to nutrient over-enrichment.

In Part I of this study (with Dr. Glibert; see Glibert et al. 2009, Aquat. Microb. Ecol.55: 17-30), six experiments that were completed to assess the growth response of K. brevis to a range of dissolved nitrogen pollutants, simulating realistic pollution levels and other environmental conditions. In Part II (with Dr. Ouattara; manuscript in preparation), four experiments were used to examine how phosphatidic clay additions from phosphate mining activities in Florida affect removal of toxic K. brevis from the water column and its subsequent survival in waters enriched with N or P.

Major findings from Part I were that 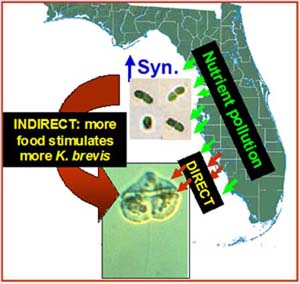 As background to our work in Part II, application of phosphatic clay from phosphate mining wastes in Florida has been considered by the state as an agent to help control K. brevis blooms through the process of flocculation and settling. However, concerns have been raised that the dense clay concentrations that may be required to control the blooms would kill beneficial aquatic life; and that the phosphate enrichment from clay additions could actually help to stimulate subsequent blooms.

Major findings from these experiments were that