Recent advances in Pfiesteria research by the CAAE have been contributed especially on the topics of axenic and monoxenic culture, food acquisition including novel phagotrophic activity, and most importantly, Pfiesteria toxins (PfTxs). Importantly as well, the CAAE assisted North Carolina by calming concerns about continued economic impacts of the two Pfiesteria species. The Center’s research determined that major tropical storms had scoured these organisms from the state’s estuaries, leaving only residual populations incapable of causing toxic outbreaks. The Center director informed the state legislature, the state environmental agency, and general citizenry of this good news through science presentations, a press release from NCSU, and news media. The data were also formally published (Burkholder et al. 2004, PNAS 101: 9291-9296).Pfiesteria species appear to be highly sensitive to the flooding and scouring effects of such storms. The 1990s, when toxic Pfiesteria outbreaks occurred, followed ~30 hurricane-free years in North Carolina’s estuaries, likely enabling the populations to build during that long period. It is predicted the sparse populations will require a substantial hurricane-free period of time to rebuild, a prospect which is not likely in the near future based on projections related to climate change. 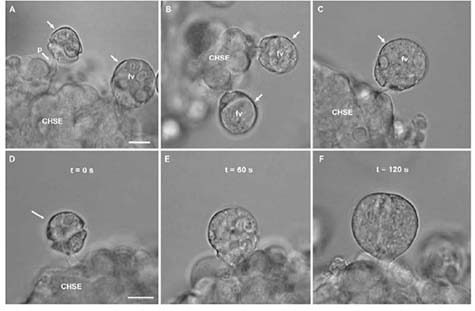 Research to improve culturing techniques provides important general assistance to the scientific community. The two Pfiesteria species are heterotrophic dinoflagellates with complex nutrition (including temporary use of mixotrophy), adverse impacts that span trophic levels, and complex interactions with other organisms (Burkholder et al. 2001a, Grattan et al. 1998, Levin 2001). The CAAE’s recent contributions about culturing Pfiesteria include the production of high cell yields in bacteria-free cultures grown on a sterile fish cell line, and the development of a semi-defined medium for axenic culture of Pfiesteria shumwayae. This research was contributed by two recent doctoral dissertations from the CAAE (Parrow and Skelton).

Much of the research conducted on toxic strains of Pfiesteria spp. has used live fish as prey to enhance toxicity and/or to study feeding, while recognizing that such prey inevitably introduce associated microbial contaminants which can complicate the studies and interpretations. Microbial contaminants also can make the sustained cultivation of Pfiesteria spp. on live fish more difficult, and the differences of scale in size and motility between Pfiesteria cells and fish can impede direct microscopic observation. In an attempt to circumvent these difficulties, Parrow et al. (2005, Aquatic Microbial Ecology 39: 97-105) developed a technique for culturing P. shumwayae monoxenically on a heterologous fish cell line derived from Chinook salmon (Oncorhynchus tshawytscha) embryo tissues (CHSE – American Type Culture Collection CRL-1681), in the absence of bacteria and other microbial contaminants. An adherent layer of fish cells was provided to Pfiesteria as a food source.

The culturing technique facilitated microscopic observation of feeding by P. shumwayae on living fish surficial tissue. Engorging of cells was observed; the flagellate cells enlarged considerably while feeding, sometimes doubling in length within minutes. The cytoplasm of more than 1 fish cell apparently could be consumed in a single feeding act. Flagellate cells that already contained food vacuoles filled with fish cytoplasm sometimes were observed to feed again, and dinoflagellates filled with ingested fish cytoplasm sometimes swam for extended periods (hours) before encysting for further digestion and cell division. Maximal densities of these cultures, 1.4 + 0.3 to 2.8 + 0.6 x 105 cells mL-1 (means + 1 SD) within 7-10 days, were up to ten-fold higher than those reported when Pfiesteria was fed live fish or cryptophyte prey in previous studies. It is also noteworthy that this culture was found to produce PfTxs (Burkholder et al., 2005; work by Dr. Peter Moeller, NOAA-National Ocean Service, Charleston, SC.

This study is the first to successfully grow P. shumwayae at high cell densities in the absence of other microorganisms. The isolates were serially cultured on fish cells for months without visible signs of contamination, abnormality, or reduced viability. The authors identified two disadvantages of this culture technique as an experimental system for assessing impacts of P. shumwayae on living fish – the lack of a specific bioassay endpoint, such as fish death, and restricted ecological relevance because of the highly artificial nature of the system. On the other hand, the technique required minimal equipment and space, time, and expense relative to previously described methods of culturing P. shumwayae on live fish (e.g. Marshall et al., 2000; Burkholder et al., 2001c); it was also more highly controlled and more easily sustained without microbial contaminants; and it produced higher cell densities.

Most heterotrophic dinoflagellates are phagotrophs, and nutritional studies are complicated by the need to culture these organisms with other living cells as a food source. Axenic culture, defined as growth of a single species in the absence of other living cells, allows direct assessment of nutritional requirements of an organism without confounding influences of other organisms. However, axenic culture of phagotrophs is difficult because it requires finding a complete substitute for the living prey. Very few heterotrophic dinoflagellates have been successfully maintained in axenic culture, likely because of unknown nutritional requirements that were not met by the culture media that have been tried.

Starting with the monoxenic cultures of Parrow et al. (2005), Skelton et al. (2008,J. Phycol. 44: 1614- 1624) first accomplished axenic growth of Pfiesteria shumwayae on an undefined, biphasic chicken egg yolk medium as a major component (CYM; final concentration 0.25% to 0.5%; following Droop, from the classical literature). Both autoclaved and untreated CYM supported growth of two of three strains of P. shumwayae. Highest cell yields were 1.1 to 4.2 x 104 cells mL-1, attained in 9-11 days. These cell yields were comparable to previous reports wherein P. shumwayae was fed live fish or cryptophyte prey, but much lower than yields that were obtained when P. shumwayae was cultured monoxenically on a sterile fish cell line by Parrow et al. Growth rates were also lower. It was suggested that although the substances present in the CYM met the nutritional requirements of P. shumwayae, the medium may not have contained some metabolite(s) in adequate concentrations or ratios to support higher cell yields; and/or that the physical characteristics of the culture medium used by Parrow et al. may have been more conducive to cell production. In the axenic cultures, at least some nutrients likely were obtained by resorption or diffusion across the cell membrane, which likely is not as energetically efficient as direct phagotrophy of fish cells. 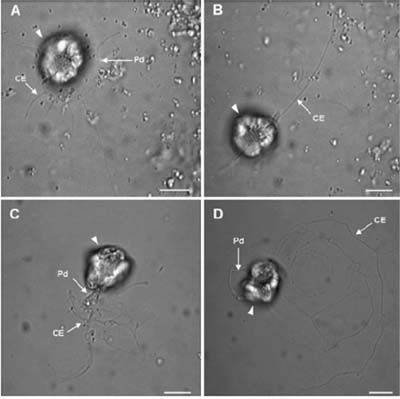 Chicken egg yolk is commonly used in bacterial media, and in media used for culturing certain protists (Skelton et al., 2008, and references therein), but P. shumwayae is the first heterotrophic dinoflagellate that was cultured axenically on a CYM. Two other points are noteworthy: First, culture media that have been used for the successful axenic culture of other heterotrophic dinoflagellates (Crypthecodinium cohnii, Gyrodinium lebouriae, Noctiluca scintillans, Oxyrrhis marina – see Skelton et al., 2008, and references therein) were also tested with P. shumwayae, and did not support its growth. Second, P. shumwayae strain CCMP2089 could not be cultured on any of the axenic culture media tested, although this strain was cultured successfully on the sterile fish cell line of Parrow et al. (2005). Such are the vagaries of research with Pfiesteria. When added to CYM, flagellate cells of strain CCMP2089 gradually encysted over several days, suggesting that the media lacked some required substance(s), or that the required substance(s) was present but not at adequate concentrations or ratios, or that a substance(s)in the CYM was inhibitory to that strain. Second, the sterile-filtered CYM, which contained no particulate food, did not support growth of these P. shumwayae strains. The yolk particles may have met a biochemical requirement, or perhaps the yolk particles were needed to induce phagotrophy and digestive vacuole formation, while the cells likely also engaged in concurrent uptake of various dissolved substrates from the medium. The presence or addition of particulates to culture media has also stimulated phagotrophy in other heterotrophic protists grown axenically (see references in Skelton et al. 2008).

The CAAE’s recent research also has led to the discovery of a novel feeding mechanism in dinoflagellates, as manifested by Pfiesteria shumwayae. In the above-described experiments with two strains of P. shumwayae in axenic CYM, Skelton et al. (2008) noted that the flagellate cells swam slowly in tight circles at the bottom of the culture flasks, generally oriented so that the cell antapex faced toward the culture flask bottom. The movement of the transverse flagellum created a roughly spherical clearing (easily discerned at 40x) that was mostly devoid of egg yolk granules. Curiously, 2-13 flagellate cells were commonly observed in the same cleared area, and up to 15 separate clearings were in the same field of view. High-magnification observations (400x) of petri dish subcultures revealed that each of the flagellate cells in the clearings had each extended and attached its feeding tube (peduncle) to the bottom of the petri dish. The attached feeding tube was videotaped spreading across the bottom of the petri dish, and cytoplasmic extensions (pseudopodia) extended from its margin. Pseudopodia in P. shumwayae had been mentioned previously, but their function was not described. In the documented observations by Skelton et al.:

“Large semi-solid masses (~40 μm) also were ingested through the peduncle. Cells that ingested large egg yolk masses often continued feeding. Particle ingestion, both large and small, occurred quickly (~10-20 seconds). Flagellate cells frequently attached to the large yolk aggregations with the peduncle and towed the particles while swimming. Often multiple cells (up to 10) simultaneously attached to a single aggregation. The epicone of attached dinoflagellates sometimes became deformed as the cells attempted to ingest the yolk particles.”

Thus, this study documented P. shumwayae flagellate cells using a novel mechanism in axenic culture to ingest individual particles ranging in size from ~0.2 to 4 μm. The ability of dinoflagellates, in general, to ingest particles the size of heterotrophic bacteria previously was contested and not well documented. The feeding behavior may have implications for the types and sizes of particles these dinoflagellates consume in the natural environment (e.g., bacteria, nonliving colloids, detritus). 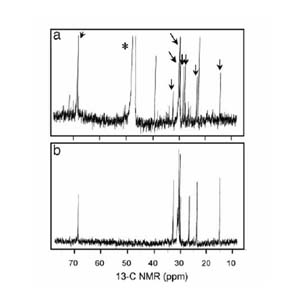 3C NMR spectra of PfTx from Pfiesteria. (a) PfTx from P. shumwayae (strain CAAE1024C) after size exclusion (HW40F column) and subsequent passage through three sequential C18 columns using d4 methanol (*) as a solvent. This material, from a fish-fed culture, shows multiple molecular species (congeners) compared with b; arrows indicate peaks in common with b. (b) PfTx from algae-fed P. piscicida (strain CCMP1832) after the same chromatographic steps used to generate a, followed by passage through a bidentate column using 100% HPLC-grade water as a solvent. From Burkholder et al. (2005, PNAS).